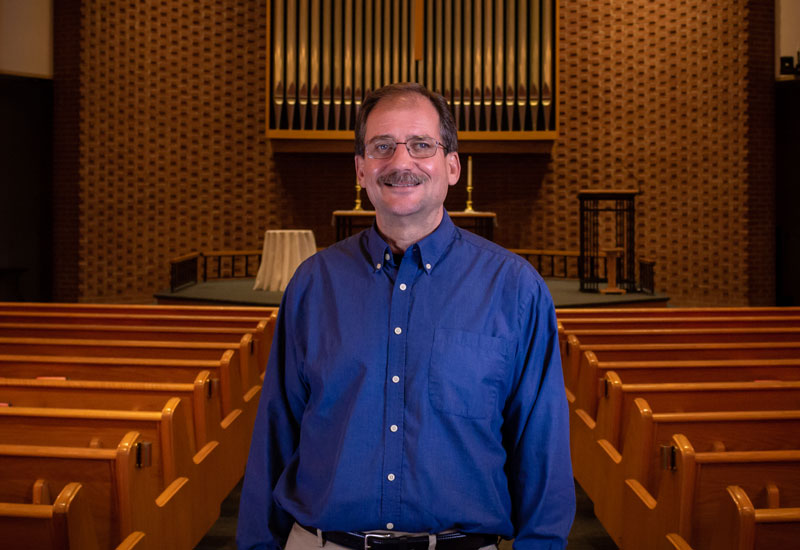 I grew up in Southern Indiana, graduating from Jeffersonville High School. After high school I attended Indiana State University where I majored in music education, French horn being my primary instrument. After college, I taught junior high school band and elementary school music in a small town near Urbana, Illinois and played in several music ensembles at the University of Illinois including the Illini Symphony and the U of I Opera Theater Orchestra.
In 1982, I felt the call to ministry and entered seminary at Asbury Theological Seminary in Wilmore, Kentucky. During seminary, I continued my horn studies with David Elliot at the University of Kentucky, sang in numerous music groups and played horn in the Asbury College Band and Orchestra. I also served for three years as Director of Music at Harrodsburg United Methodist Church, a medium-sized church in Harrodsburg, Kentucky.
I graduated from seminary in 1986 and returned to Indiana to serve in ordained ministry in the South Indiana Conference of the United Methodist Church. I pastored two small churches in Shelby County, was the associate pastor at Southport United Methodist Church on the south side of Indianapolis and pastored churches in Fort Branch, Bloomington, and Terre Haute. In 2007 I was appointed to serve as a district superintendent in the South Indiana Conference, which soon became part of the Indiana Conference of the United Methodist Church.  In July 2013 I became the lead pastor at St. Mark’s United Methodist Church in Carmel, Indiana.  In May 2013, I completed a doctoral degree in congregational leadership at Garrett-Evangelical Theological Seminary in partnership with the Kellogg School of Management at Northwestern University in Evanston, Illinois.
My wife, Michelle, and I have been married for 34 years and we have a daughter, Audra, who is married and lives with her husband, Steven, in Castleton, Indiana, on the northeast side of Indianapolis. We have two sons, Ross and Ian, who are both deceased. Michelle retired in May 2013, after working in human resources at Indiana University in Bloomington, Indiana, where she administrated a personal contribution retirement plan.
Although most of my time is occupied with family and my life in ministry, I continue to play the French horn.  I am passionate about worship, music, missions, and leading small groups.
X